Pakistan star opener batsman Ahmed Shehzad, who has not been up to his best over the past couple of years or so, is preparing to consult a psychologist to help him regain his form and reputation. He has failed to record a century in ODIs since 2014 and averages just over 27 with the bat over the last 3 years.

The 25-year-old will be consulting a British psychologist Dr. Taimoor after the National T20 Cup concludes. Observing the young batsman’s dip in form, Pakistan coach Mickey Arthur has encouraged him to contact a psychologist to recover his vanishing confidence.

It is also believed that Shehzad lost his form ever since he suffered a fractured skull after being hit by a bouncer from New Zealand’s Corey Anderson in a Test match in Abu Dhabi in 2013. 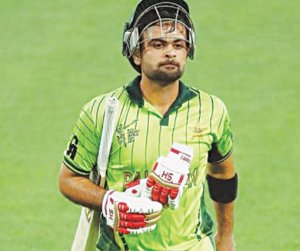 Shehzad, who recorded his first ODI appearance for Pakistan in 2009, started off well in his career and was touted be the next best Pakistani batsman. He even drew comparisons to Virat Kohli from the Pakistani Cricket fans, but he has been suffering due to lack of form over the past few years.

He also failed to deliver a promising performance in the recently concluded Sri Lanka series in UAE and was subsequently swapped with left-handed batsman Imamul Haq in the ODI series, who scored a century on his debut, only to make matters worse for Shehzad.  It had been rumored earlier that his terrible performance in 2016 World T20I led to a PCB committee proposing a ban on him.