It was an eventful day at the Newlands in Cape Town with India trying to chip away the deficit and the South African pacers, being dubbed as “Four Horsemen”, charging in, firing missiles at the Indian batsmen. Test cricket was at its best on both the days and will continue to be so as long as the pitches are like the one at Newlands. The Proteas skipper Faf du Plessis was seen shuffling his options meticulously during the 2nd session of play.

It all started with 5 consecutive maidens from Big Vern at the start of day 2. Cheteshwar Pujara may not be in the league of Rahul Dravid yet, but his Dravidesque calm was enough for the Indian fans to not lose hope against the menacing South African pace attack. But after a hard-fought 26, Pujara perished to a delivery miles outside off stump in a ‘brain-fade’ kind of fashion.

When the 7th wicket fell with the scoreline reading just 92, it looked like India would be bundled out around 100. However, a fighting 93 from Hardik Pandya followed and a patient knock from Bhuvaneshvar Kumar ensured India managed to salvage some pride and reduce the lead to only 77. 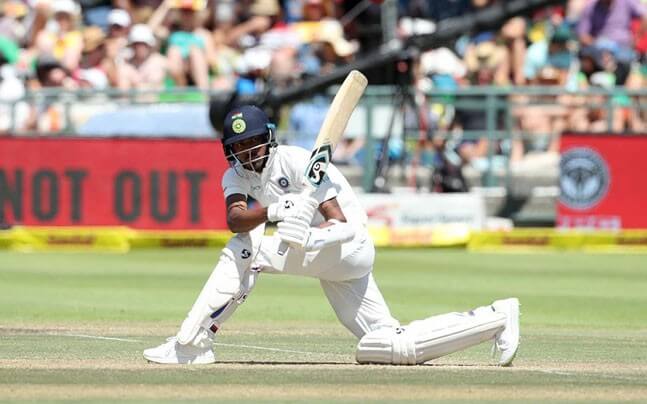 The two batsmen added 99 runs for the 8th wicket in 147 balls. The Proteas kept hunting for wickets but couldn’t get rid of the duo who frustrated them for quite a significant period of time.

The stand was finally broken when Morne Morkel managed to draw an outside edge off the bat of Bhuvneshwar Kumar immediately after the tea break. Bhuvi scored a defiant 25 off 86 deliveries. Hardik Pandya was inching towards a well-earned test century and had already cut the deficit down below the 100-mark.

It was right then that Kagiso Rabada removed Pandya on 93 with a short delivery that angled across Pandya. Rabada had been steaming in all day throwing rockets at the Indians. Pandya contemplated on hitting an uppercut but ended up edging it into De Kock’s gloves which brought an end to a highly entertaining and valuable knock. As a result, Faf du Plessis was a highly relieved man and it was quite clear from the fact that du Plessis went on to kiss the forehead of young Rabada after the wicket.

This was the moment of the day considering how South Africa has always had a blot on their history for Apartheid and other movements. With all the constant chirping regarding the quota system and people of color, this moment stood out signifying the true spirit of the Gandhi-Mandela Freedom Trophy. It was a welcome sight after a spectator was seen shouting “white power” during a Big Bash game down under on the same day.

It was a great gesture from du Plessis and this is not the first time that he has done so. And how could the Twitter universe miss out on such an incident? Let’s check out some of the tweets who mentioned the above incident:

Get you a bae who looks at you the way du Plessis looks at Rabada ? https://t.co/HhjS5TcQYo

Can’t wait until someone looks at me like Faf looks at Kagiso. pic.twitter.com/Qu6UtkghM8

I have never seen a captain appreciating his bowler like this. For me faf is the best captain..#SAvIND pic.twitter.com/T7KeMHSjOs

This picture really made my day..Salute to the captain faf?Black and white is a colour of skin not a heart✋#antiracism#FreedomSeries #SAvIND pic.twitter.com/TdcBgEk74C

If he doesn’t look at the way Faf look at Rabada y’all playing #ProteaFire #Rabada pic.twitter.com/Q1aaFdd2iN

Faf is ready to RISK IT ALL for Kagiso Rabada????????? pic.twitter.com/Gw4mGtwDyJ