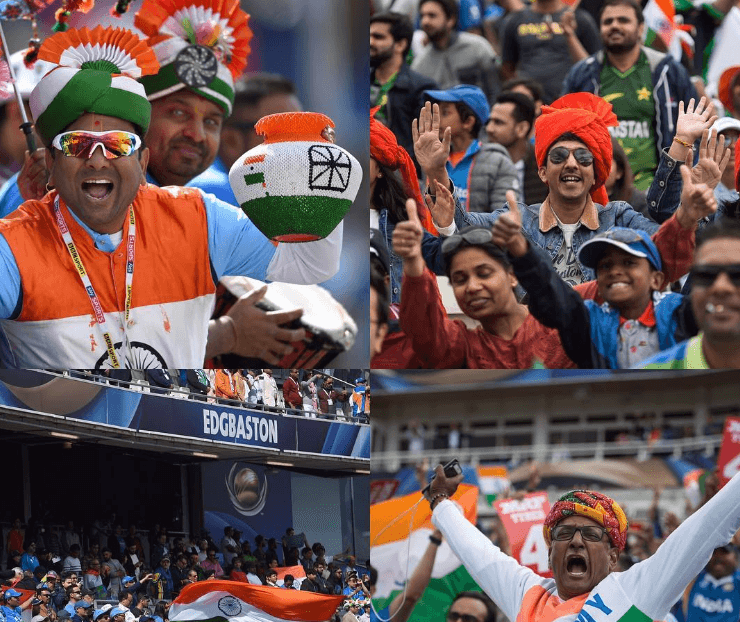 Vintage India against their arch rivals Pakistan. In spite of the rain interruptions India managed to score 319 in their reduced 48 overs.

Perfect Start to the Story

Shikhar Dhawan and Rohit Sharma started off sedately making the audience believe that there was an invisible devil in the wicket. The rains also arrived just when the Indian side was getting into the stride.  But Dhawan started opening his bat and the score soon started galloping. Unfortunately Dhawan drove directly down the throat of Azhar but not before he hit a brilliant 68 in 65 balls. In came Virat Kohli and we had lot of expectations from him, but he somehow could not get the score ticking. Rohit Sharma was meanwhile run out when he was on 91 and the situation seemed to go out of India’s hand.

This was old vintage Yuvraj risen from the ashes. He sweetly timed the ball and took the stuffing out of the Pakistani bowlers. By the time he was out, lbw to Hasan Ali, Yuvraj had smashed 53 in just 32 balls. Virat meanwhile was motoring along smoothly at the other hand.

The Fantabulous Last Over

It was time for Hardik Pandya to show why he was chosen over R Ashwin. He hit three big sixes in the first three balls of the last over bowled by Pakistani spinner Imad Wasim. In the end Virat finished off the innings with a four.

The highest target chased down by Pakistan in ODIs outside the subcontinent is 302 against England out here in England. Let see what they come up with this time around. Keep reading Cric Times to catch the latest on cricket as it happens.

India Thrash Pakistan and Australia Vs Bangladesh Clash In Champions Trophy
Will Ashwin Be Replaced By Hardik In The Game With Pakistan?
Comment